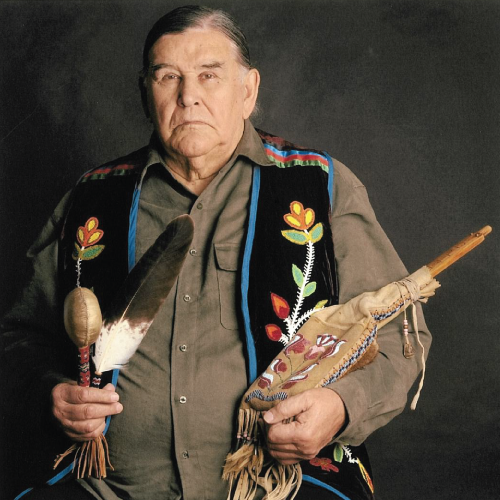 Native Lights is a weekly, half-hour radio program hosted by Mille Lacs Band of Ojibwe members and siblings, Leah Lemm and Cole Premo. Native Lights is a space for people in Native communities around Mni Sota Mkoce — a.k.a. Minnesota — to tell their stories about finding their gifts and sharing them with the community.

Today, the first of two special editions of our show, honoring the life and legacy of NeeGawNwayWeeDun, The Thunder Before the Storm, who was known by his colonial name Clyde Bellecourt. Bellecourt passed away in his Minneapolis home on January 11th, 2022. He was 85.

Clyde Bellecourt was a member of the White Earth Band of Ojibwe and was a long-time civil rights advocate and co-founded the American Indian Movement in 1968.

Throughout his many decades of activism, Bellecourt and AIM leaders sought solutions to police brutality, treaty rights, housing discrimination, and the loss of Indian children. He fought to create culturally specific education, innovative job programs, against sports mascots, and for human rights for Indigenous people here and around the world.

His work was revolutionary and sometimes controversial.  Today we honor NeeGawNwayWeeDun, by hearing from community members who knew him well, and who share stories and shed light on the impact and legacy of Clyde Bellecourt.

** We also want to acknowledge the passing of Peggy Bellcourt on March 16, 2022 – Peggy co-founded the American Indian Movement alongside her husband Clyde. They were married for 56 years. Clyde said in his 2016 autobiography that his life with Peggy was inseparable from the Movement… and it was her strength and support that made his work in the Movement possible.

This is the second part of our special edition show, honoring the life and legacy of NeeGawNwayWeeDun, The Thunder Before the Storm, who was known by his colonial name Clyde Bellecourt.  Clyde Bellecourt was a member of the White Earth Band of Ojibwe and was a long-time civil rights advocate and co-founded the American Indian Movement in 1968. Bellecourt passed away in Minneapolis on January 11th, 2022. He was 85.

On today’s show, we learn more about Clyde’s time in prison as a young man, and how it strongly impacted him uncovered his purpose.  During that time of incarceration, Clyde Bellecourt met key people who helped him connect to Native traditions and spirituality, and together with whom he would co-found AIM.  This time of growth and healing informed every aspect of NeeGawNwayWeeDun’s advocacy work, which he carried throughout his life.

Native Lights: Where Indigenous Voices Shine is produced by Minnesota Native News and Ampers, Diverse Radio for Minnesota’s Communities with support from the Minnesota Arts and Cultural Heritage fund.